Hi guys, it’s been a while since I last posted an article. Uni applications, interviews, internships and loads of day trips to London kinda got me busy over the last few weeks.

I’m back with a new blog post to talk about New Girl and its final season which aired this past month. Our favourite crazy roomies got back together for 8 last episodes to say goodbye to their beloved viewers.

As a big fan of the show for many years now, I gotta say that waiting for season 7 was draining with no airing date to be seen for nearly a year. I couldn’t wait for more content but I also didn’t want the series to end. Naturally, my expectations were high and I was mostly wishing for the best for my favourite couple: Jess and Nick.

The first two episodes aired mid-April and started 3 years after the iconic elevator scene starring Nick and Jess, Schmidt announcing Cece her pregnancy and Winston and Aly getting engaged. When the final season debuted, I couldn’t find what made me fall in love with New Girl in the first place: it reminded me of season 3 all over again; struggling to stay relevant and running out of jokes. Plus the time jump was a bummer as it robbed us of Aly and Winston’s wedding.

And then the third episode happened and I finally found the old New Girl back, I couldn’t stop laughing out loud and from there it started to hit me that this season was a farewell and that I was going to greatly miss those stupid guys.

The newest addition to New Girl or the New Girl herself if I might say: Ruth. Her relationship with Schmidt was super cute and it was nice to see the gender roles reversed with him being a papa bear and a stay-at-home dad, while Cece chose to pursue her career. Her relationship with her uncle Nick is also unique in her own way and she definitely brought something special to the show.

Fun fact: Did you know that she was played by twins? Danielle and Rhiannon Rockoff both played the role.

That was truly heartbreaking. I don’t know what I was thinking thinking that this cat would live forever. You gotta admit that Furguson and Winston had been the purest relationship on this show, if it wasn’t your otp you might wanna reconsider your life choices. Anyway, what made my day was Furguson’s tombstone clearly referencing Game of Thrones with a delightful message: “and now his watch has ended”. It made the whole situation a little less dramatic.

Special mention to the new cat’s adoption. Did you also weep for 5 minutes straight or was it just me?

Obviously, I’ve been rooting for these two since they first kissed. We knew their wedding would appear later on the show as it was the biggest will they-won’t they couple of New Girl. The entirety of the season was filled with cute moments from our favourite pairing. My top bits?

Nick saying “there’s nothing that you could do that would make me love you any less” to Jess when they both thought she had killed Winston’s cat.
Jess and Nick adopting a dog: the perfect combination between cute and hilarious.
Nick FINALLY proposing to ‘(I’ve Had) The Time of My Life’ (remember when she used to watch Dirty Dancing non-stop when she got dumped?).
The long-awaited wedding that perfectly suited them. Simple, weird and beautiful. Nick and Jess tied the knot, at last.

Bringing all the old characters back

All the old characters gradually made an appearance; starting with Outside Dave (who was oddly inside by the way), Dr Sam, Jess’s cousin/ex (that’s a combo you don’t see every day), Fawn Moscato and Sadie. Bigger characters also appeared on screen for one last time such as Russell and Coach. 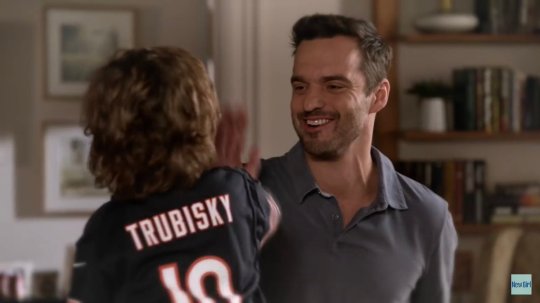 Remember when Nick lost a bet to Schmidt? He had to name his firstborn after the famous actor; Reginald VelJohnson and he kept his word. However, you had to closely pay attention to notice it, as it was featured very subtly in the credits.

And to end on a lovely note… I cannot not mention Jamie Lee Curtis’s Mama Day urging Jess to take some pot: ‘Just take a small take, it’s not that strong. It’s so weak they call it gun control in America’.

The show has always been liberal and I loved that they used their platform to make a political statement.

Of course, the end was predictable (as most sitcoms are) but it was beautifully done and they didn’t fall into the trap of doing a whiny ending. It ended just as it should: with a great prank, Winston stylez. So long New Girl!